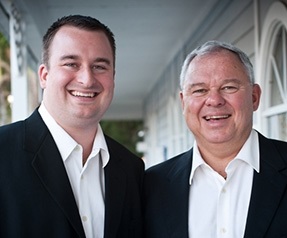 Why I do this?

I do this to help people.  I have seen so many wrongdoings at the hands of so called Financial Advisors.  My motivation is to see one less person get taken advantage of.  To make sure people get the right information.  I want to make a difference in this industry and make a difference in people’s lives.  So many people have worked so hard their whole life to finally be able to retire and relax.  They should not have to spend any time worrying about their finances.  My top priorities are educating people on their current position and letting them know what all their options are.  Our philosophy is the more people we help the more we help ourselves.  My Dad taught me that.  To fully understand my motivation lets go back to the beginning…

I was raised in Illinois by two very hard-working parents who did everything to provide a good life for their four boys.  My father started with Prudential when he was 23 years old.  He owned a few businesses along the way but would eventually come back to the financial world.  My Mom stayed at home and took care of the four boys.  I graduated from Illinois State University with a bachelor’s degree in Business Management.  In June of 2008 I joined a large financial company in Chicago.  Now this was the middle of 2008 and right at the heart of the Financial Crisis.  I remember advisors who had been there for years constantly watching the markets on the tv.  At the time I did not quite grasp what was happening.

In February of 2009 I decided to join forces with my Dad in Florida.  I called him to ask if I could come work with him and his response was “what took you so long”.  My parents had moved there several years earlier and opened an office on Pine Island.  I learned more in one day working with my Dad than I did in six months at my old job.  At the time we were running radio commercials about protecting some of your money from the stock market crash.  People would call in and we would go visit them at their house.  We went into so many homes where people were mentally and physical exhausted by what was happening to their money.  They had an advisor but the advisor wasn't doing anything.  They just kept watching their money disappear.  Their advisor would either not answer their phone calls or simply tell them not to worry it will come back.  I could not believe what I was seeing and that so many people were in the exact same situation.  My thoughts at the time were, “this is what retirement looks like”, "this is crazy", “there has to be a better way”.  People were losing in a month what it took them years of hard work to earn.

One of my first appointments in Florida included visiting a couple who had fourteen annuities!  It took us hours to track down the contracts and put together a list of what they had.  When leaving their house, I asked my Dad “who helps these people”, he responded with “we do, one at a time.”  I have taken that to heart.